In 1972, the Ebro Observatory received a telescope used by NASA to monitor solar activity with the aim of guaranteeing the safety of the Apollo astronauts.

In 1961, the president of the United States of America, John F. Kennedy, decided that the arrival of man on the moon would be a priority objective of his country. With this action, he launched the great scientific and technological machinery that allowed Neil Armstrong and Buzz Aldrin to walk on our satellite before any other human being, just 50 years ago. 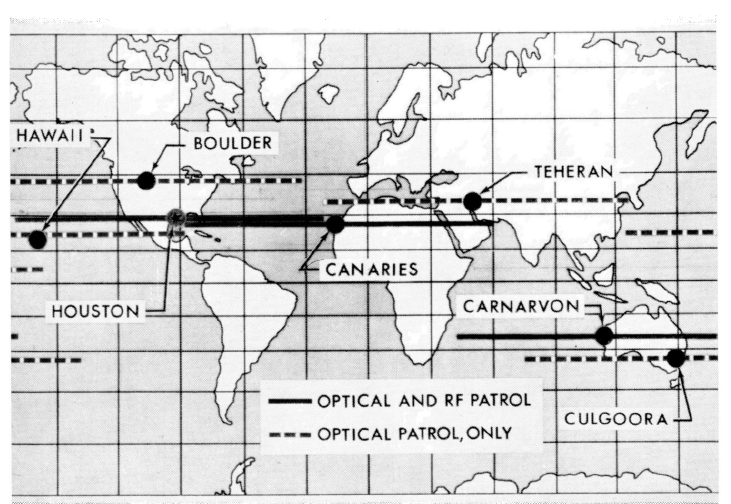 Map showing the situation of the solar observatories of the SPAN network. Image extracted from Robbins and Reid (1969).

One of the problems to solve was the safety of the astronauts, exposed to the harmful effects of the solar wind. Thus, detailed monitoring of solar activity was necessary, since solar flares are capable of accelerating a large number of particles at high enough energies so that radiation is detrimental to astronauts in space, outside of the protection of our planet. It is for this reason that NASA created the SPAN network (Solar Particle Alert Network) that consisted of seven solar observatories located in different parts of the planet, in order to guarantee a permanent monitoring of solar activity. One of the observatories was located in Maspalomas, Gran Canaria. The radio telescopes had parabolic antennas (inserted inside a protective radome) with a size of 2.5 meters in diameter and capable of observing three frequencies (1420, 2695 and 4995 MHz).

In those days, the Ebro Observatory collaborated with NASA and the Office of Scientific Research of the US Air Force (AFORS) in the study of the electron density of the terrestrial ionosphere (a scientific issue closely related to the study of the activity solar), but did not participate directly in the Apollo program.

However, in 1972, once the Apollo program was finished, the radio telescopes of the SPAN network were dismantled, including that of Maspalomas, which was donated by NASA to the Spanish Commission for Space Research. Then, the Commission delivered it to the Ebro Observatory. 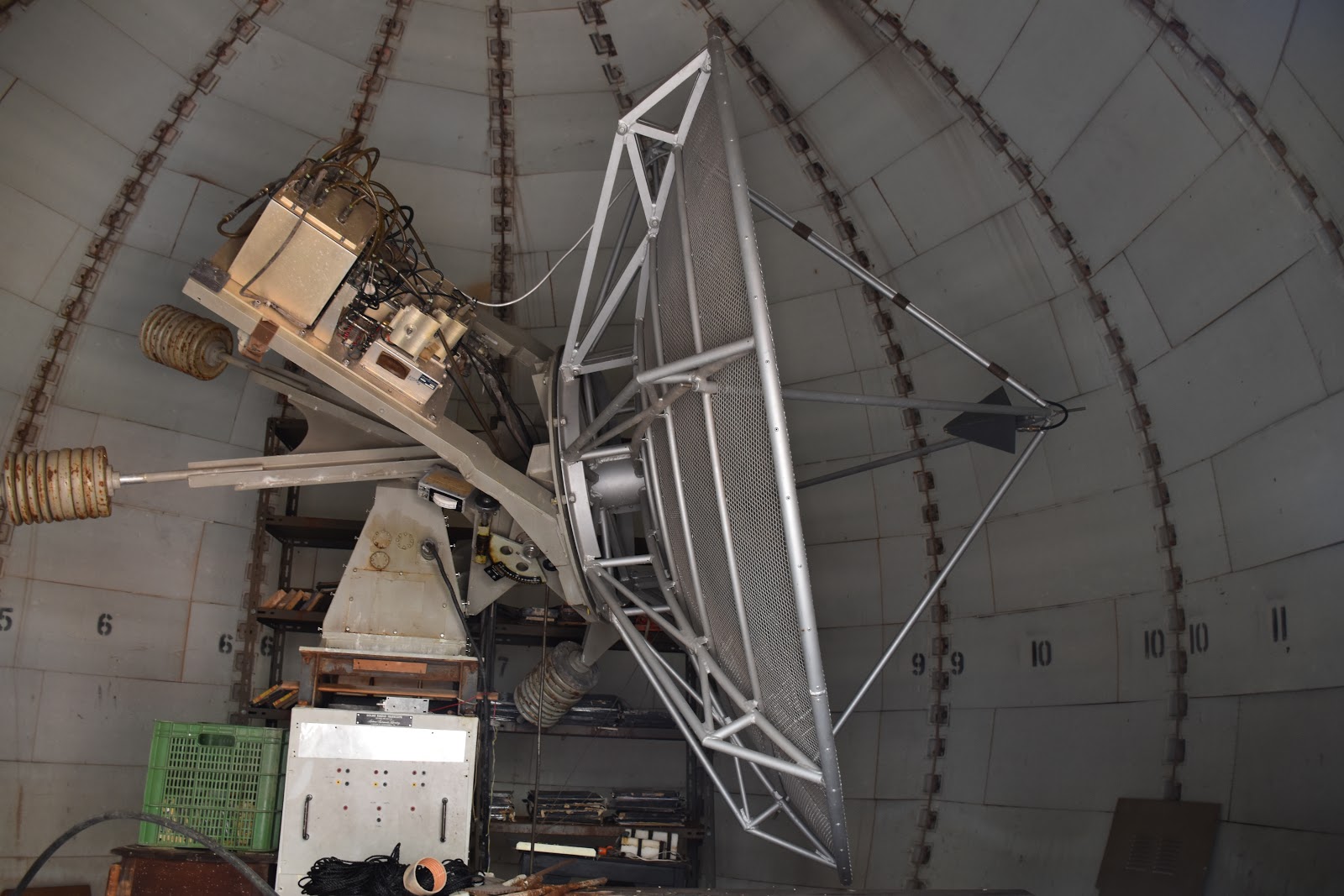 Image of the interior of the radom, in which the parabolic antenna of the radio telescope is seen. Image by J.J. Curto Subirats (2019).

With certain difficulties at the beginning, due to the lack of spare parts and personnel, the radio telescope was used regularly to observe the solar activity so that by the eighties its exploitation was already normal, once the initial difficulties were solved. At that time, the radio telescope was used to study the impacts of solar flares on geomagnetic activity, but little by little, due to its obsolescence, it fell into disuse. There was a joint project with the UPC to renew its key elements, but the project did not give the expected results and, thus, the telescope was no longer used.

Currently, the radio telescope antenna is still installed in its place, behind the Ebro Observatory's Electric Pavilion. Despite its relevance, as part of the Apollo program, the telescope has not yet been included to the typical route of the scientific outreach visits. 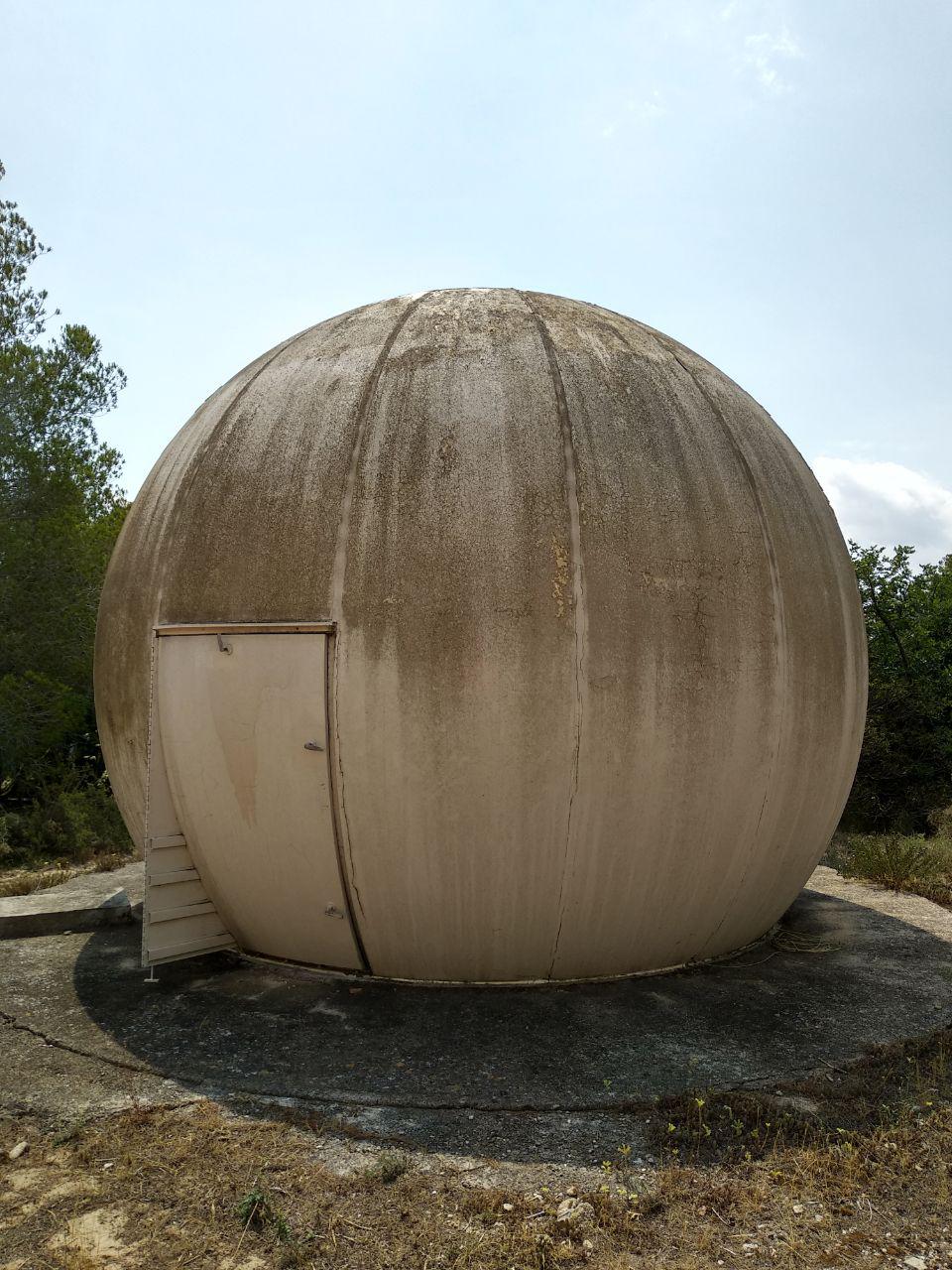 Current state of the radome that hosts the radio telescope. Image of P. Quintana-Seguí (2019).

A radio telescope is an antenna and a radio receiver intended to record radio waves from space. Radio waves are the part of the electromagnetic spectrum with a longer wavelength than the infrared.

The Ebro Observatory is a foundation dedicated to the study and observation of geophysical phenomena. It was founded in 1904 by the Company of Jesus and is located in the municipality of Roquetes (Baix Ebre). The Observatory is a university institute of the Ramon Llull University and is a coordinated center of the Superior Council of Scientific Research. The Board of the Foundation is formed by the City Council of Roquetes (Presidency of the Board), the City Council of Tortosa, the Provincial Council of Tarragona, the Department of Enterprise and Knowledge of the Generalitat of Catalonia, the Department of Territory and Sustainability of the Generalitat of Catalonia, The Meteorological Service of Catalonia, the State Meteorological Agency, the Superior Council of Scientific Research and the National Geographical Institute.