Record of the magnetic declination in Roquetes (updated every 12 minutes).

THE LINE WITHOUT ANGLE

At the time of Columbus the compass needle in the Iberian Peninsula did not point towards Polaris (the geographic or true North), but it was always deflected towards east. However, as he crossed the Atlantic on one of his voyages to the New World, somewhere during the journey his compass pointed directly to Polaris, right in the direction of true North. He had crossed the agonic line, literally, the line without angle. This phenomenon, which might seem unusual, even radical for the people of that time, is now a well known fact and hides no mystery. Many of us may have heard that in the Iberian Peninsula the compass needle is deflected towards west; we might even say that it is an accepted truth. This is justified by the fact that it was the case for the last three centuries. The magnetic field of the Earth, however, changes slowly over time, and the agonic line that runs through Europe in a direction approximately north - south, has been progressing slowly from east to west since the mid-nineteenth century. Thus, the agonic line was centered on the eastern part of the Iberian Peninsula sometime between late 2009 and early 2010, and moved through the western part of the Terres de l’Ebre in late 2014, beginning of 2015. In short: magnetic declination becomes east. The compass needle points to the right; we will have to get used to it.

World Map of Magnetic Declination valid for the time of Columbus. It was computed from an archaeomagnetic model developed in close collaboration with Ebre Observatory. The red areas correspond to positive declinations; blue areas to negative declinations. The agonic line (represented by a thick black line) is observed in the Atlantic.

Declination map valid for the present time. The agonic line is observed to the east of the Iberian Peninsula, particularly at the Terres de l'Ebre. The agonic line has progressed erratically since the epoch of Columbus, but it has been drifting westward since the mid-nineteenth century.

Magnetic observatories are facilities devoted to measuring the changes of the Earth's magnetic field at their location. From their measurements, integrated in a worldwide network which includes the two stations managed by Ebre Observatory, one in Horta de Sant Joan and another in Livingston Island (Antarctica), scientists can infer the shape and intensity of this physical magnitude globally. It is precisely thanks to data from many observatories like ours around the world that models and maps can be developed to show how declination varies over time and space. Scientists in Ebre Observatory are also experts in developing models and maps of these features. Other methods of analysis, which include dating of old samples, have been developed in close collaboration with researchers from Ebre Observatory to allow a retrospective look of the magnetic field over thousands of years in the past (although with a greatest uncertainty), long before the advent of the first magnetic observatories. But it is precisely in these observatories, where measurements are much more accurate, that we substantiate that the agonic line passed through Ebre Observatory in Roquetes in April 2014, and through our station at Horta de Sant Joan in September 2014. Indeed, the line possesses an intrinsic oscillation due to the magnetic field produced by the ionospheric currents induced by solar radiation. This runs over tens of miles a day around an average position, relatively at rest, which is attained at night and that we use as a reference. In fact, this daily oscillation made the agonic line to come across Roquetes, for the first time, twice a day since January 2014, preferably during the early morning (see, on the top of this article, the compass direction and the record of the magnetic declination at present, or an animation for a whole day). And at some extent moves in an erratic manner during geomagnetic storms, these taking place when particles from a solar eruption hit the Earth (see an example in this other animation). 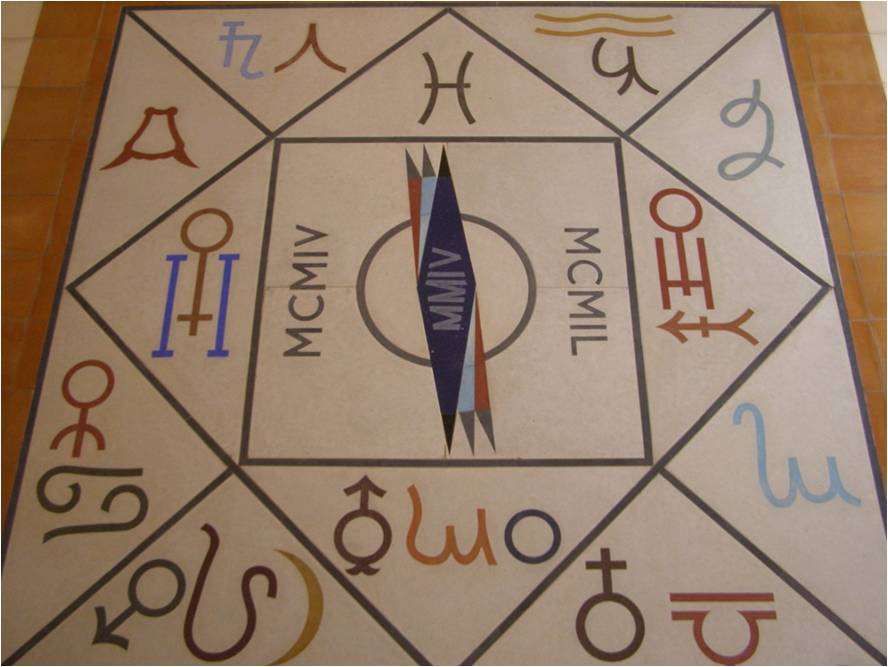 Detail of the mosaic on the floor of the Landerer Pavilion at Ebre Observatory, where a compass is displayed with its changes of direction along the first one hundred years of its history (particularly for 1904, 1949 and 2004). While the current declination is close to 0˚, the measurements made in the early times of this institution established a compass deflection of about 14˚ west from true North.

All this is anecdotal for mostof us: nothing will stop working because of this change; even "classic" hikers can continue to use the compass as a good indicator of true North in our country, now and for the rest of their lives.Of course, those who come after us, and even today systems that need higher precision, will have to correct the difference between magnetic (compass direction) and geographic (true) North. But all this is certainly a story that illustrates to what extent we have a detailed understanding of the internal dynamics of our planet and of the scientific issues surrounding this,and of how our institution is represented at the highest international level.